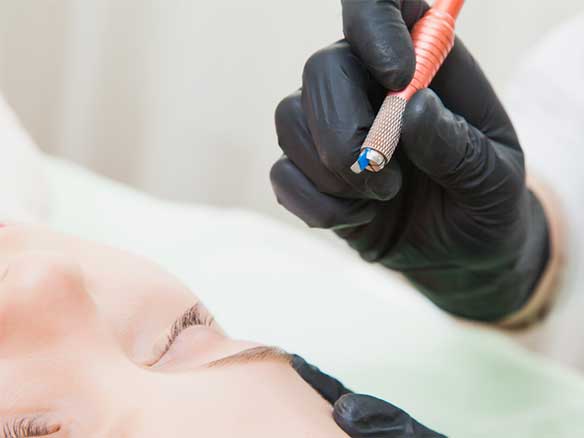 There is no such thing as good microblading!

Who am I to be making such a bold claim? Would you believe, a trained microblader? How about a microblading patient? I received the best and most prestigious training in the industry. My brows were done by one of the most skilled artists to date. You can imagine how enthusiastic I was about microblading. I bought into the rhetoric and passed it along to others…until I saw the truth.

Why I Left The Microblading Business

I HAVE SCARS FROM MICROBLADING! So does everyone else who has had the treatment. What a wake-up call for me to realise this! I have spent the last two years trying to remove the work she did. I’ve tried tattoo removal treatment, laser, microneedling and chemical peels. The scars are still there (so much for the semi-permanent claim).

I stopped microblading when I saw how traumatic it is. Cutting and shoving pigment into the skin is a recipe for disaster. There is nothing natural about it! How could I sleep at night, knowing I had permanently damaged my clients’ faces?

Microblading cuts will eventually leave you nothing but scars!

Microblading is called semi-permanent because the implanted pigment does not last forever. The scars, however, are there for life. Even in the hands of the best-trained surgeons in the world – any blade (even a scalpel) leaves a scar. Most often, microblading turns red and leaves the skin red. The slits can often become ridged. Striation bumps make it resistant to pigment and inhibit hair growth. One can keep their brows looking great with touchups – but only for so long. It doesn’t take long before the skin is so full of scar tissue that it can no longer accept more pigment. All that is left are the scars.

Once your skin is done and scarred, it is DONE. No laser removals, no saline flushes and no makeup will make it look the same. You have to see it first hand (like I do, daily) to understand the importance. It’s a beauty epidemic. I believe in the future we will look back on this and say what were we thinking?!!!!!

What is really important in cosmetic tattooing?

The health of your skin is of primary importance. Quality cosmetic tattooing is not meant to damage anything! It is meant to enhance or bring out natural beauty. It certainly isn’t intended to destroy it. Microblading does not qualify. Thankfully, there is a far superior method of cosmetic tattooing eyebrows.

THIS IS NOT MICROBLADING. It does not involve slicing cutting and scarring the delicate eyebrow skin. The hybrid technique uses nanoneedle technology (used in scalp micropigmentation) to gently implant pigment into the skin. Using it to create eyebrows is no easy task, however. Drawing with a thin needle is much more difficult than with a blade. The preservation of your skin is worth the extra effort!

This signature cosmetic tattoo eyebrow treatment is modern and revolutionary. Using a cosmetic tattoo machine with the finest needles, we can transform a face: creating beautiful eyebrows, strand-by-strand. The nanoneedle moves up and down many times faster than the eye can see. The needle penetrates and exits the skin very rapidly, injecting pigment into the skin. It gives the most natural-looking, 3D-like results: perfectly filled-in, and balanced. The eyebrow shape and color is custom-made to each customer’s face. The results last for one to three years. The idea is much the same as microblading, except it lasts longer and maintains the integrity of the skin.

What is the difference between microblading and the machine?

Microblading and micropigmentation are both marketed as cosmetic tattooing. Both are sold as an enhancement for one’s eyebrows. They are used by people with missing, damaged or partial brows. They are also used by beauty enthusiasts, beauty professionals and movie stars. They look very similar when first applied but results from the machine last as 12x as long. One uses a blade and the other needles. Ultimately, the biggest difference is how they affect the skin. Microblading will damage it! This is no longer acceptable.

Can scaring happen with the machine as well?

The possibility of scaring is greatly reduced by choosing needles over a blade. It is still important to choose a qualified artist, both for aesthetic and safety reasons. Machine work is very advanced and takes a long time to master. Someone without proper training could damage the skin just as with microblading.

Offering Perfect Eyebrows Without The Risk

I told of my own struggles with microblading. Giving up after investing time, effort and money into the training is never a light decision. I still see my scars and feel all the emotions so many other women are experiencing. Thankfully, I am able to do something about it. I am able to raise awareness and provide an alternative, here in Georgia. Maintaining the skin over the long term is of utmost importance to me. I have left microblading for micropigmentation, and now I can sleep well at night.

Thinking of having your eyebrows done?

Have a tough stomach? See what happened to this beautiful woman when see had microblading done: https://www.buzzfeed.com/laurenstrapagiel/microblading-eyebrow-infection?utm_term=.bfaXnQ42b